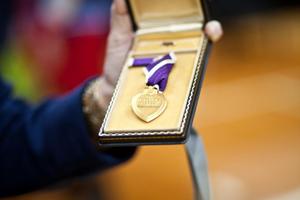 On November 8, 2019 Robert G. Cole High School held its annual Veterans Day Observances during which a Purple Heart Medal thought to be that of the school’s namesake was donated to the school.

On November 8, 2019 Robert G. Cole High School held its annual Veterans Day Observances during which a Purple Heart Medal thought to be that of the school’s namesake was donated to the school by Ms. Lisa Ludwig of Long Island, New York. Not long after the ceremony, the school became aware of information that began to cast the validity of the medal’s origins in doubt. While investigating these claims the school was contacted by Mr. Robert Bruce Cole, son of LTC Cole, who confirmed his possession of both the Purple Heart and Medal of Honor.

Prior to this the school had made numerous attempts through the years to locate Mr. Cole without success and he was presumed to have been deceased. Mr. Cole was very gracious in his acceptance of the school district’s apology, offering to donate the actual Purple Heart and other artifacts to the school for public display.

FSHISD has no reason to believe that Ms. Ludwig is involved in the alteration of the original Purple Heart Medal and we are grateful for her willingness to donate what she perceived as an authentic and significant piece of history.

This incident calls attention to what some historians describe as a perversion of history: The Forgery of Military Medals of significance for financial gain. As a school district located on a military installation serving military children, we find this behavior to be repulsive and not in keeping with the values we see represented in the parents of our students. Those who steal the honor of our service members should be held accountable for their actions.

In the coming days the students will be informed of the true facts surrounding the Purple Heart donation and the generosity of Mr. Cole. This incident, while disappointing, presents an educational opportunity that our students and the general public can learn from. These lessons center on the values of those who diminish the honor of our veterans, the values of those who would seek to preserve history by donating to the school and the values of the Cole family who have entrusted this district to preserve their most treasured memories.

The Fort Sam Houston ISD takes great pride in honoring the legacy of LTC Cole and is grateful to his son for his understanding and willingness to honor the school with the Purple Heart Medal. This medal and any other artifacts Mr. Cole may choose to donate will be displayed publically in a manner that preserves LTC Cole’s legacy so future generations of Cole students will continue to learn from his example.