About Us » Faculty Awards and Recognitions

This page is dedicated to celebrating the successes and recognition of our highly qualified, enthusiastic, award-winning faculty here at Cole Middle and High School. We are so proud to boast about our excellent staff. Their efforts have helped make a difference in our students' lives.
The Cole Golden Apple
The Golden Apple is an award passed from educator to educator at Cole Middle/High School. During each monthly faculty meeting the apple is passed on to someone deemed most appropriate by the current winner. Who will receive it next?
HEB Excellence in Teaching Award
This award celebrates public school professionals whose leadership and dedication inspire a love of learning in students of all backgrounds. With more than $800,000 in cash prizes awarded annually to deserving teachers and principals and school districts, this is one of the largest monetary recognition programs in the nation.
Trinity Prize for Educational Excellence
Each year Trinity University awards two teachers this prize from among the 21 school districts in the San Antonio area. The competition process is very rigorous. There are four general criteria that are used in selecting the award winner: outstanding teaching, leadership in the school and district, leadership in the education profession and outstanding community service.
KENS 5 ExCEL Award
The goal is to recognize the outstanding educators in the San Antonio area who are making a positive impact on the lives of our children. Their mission is to make outstanding public school educators known in the community, bringing to light the positive role that teachers play in the future success of our communities and the vision is that, through this program, we will demonstrate to our children how much we value excellence in teaching, and we will see ExCEL teachers become role models for students and other teachers in the community. Previous FSHISD ExCEL Award winners are:
FSHISD Hero Award
Selection for this award is based upon demonstration of outstanding contributions over a period of time that are above and beyond the call of duty.  Recognized at the monthly Board of Trustee meeting, recipients receive a Certificate of Achievement, a FSH hero pin, and have their name inscribed on a plaque handing in the Professional Development Center.
FSHISD Paraeducator of the Year Award
Nominees must inspire students to succeed and demonstrate leadership qualities in the classroom, school, school district, and the education profession. The recipient of this award is recognized at a school board meeting and at the end – of – year district awards ceremony receiving both a Certificate of Appreciation and an award trophy.
FSHISD Award of Excellence
The Award of Excellence is designed to be the highest honor awarded by the Superintendent of Fort Sam Houston schools.  Selection is based upon recognized excellence in a state or national educational competition or similar activity, a unique accomplishment that furthers the district’s mission, or as honorary awards for services or accomplishment that significantly assists or support school functions, services, or operations.  Both students and adults may receive this prestigious award. Recognized by the superintendent, recipients receive the Award of Excellence Coin.
USAA Educator in the Workplace Internship Participant
Each summer an educator from Fort Sam Houston ISD is chosen to work at USAA for six weeks to learn about the skills students will need to be successful in a business environment. The teachers gain a wealth of knowledge and experience to bring back to their classrooms. Chosen teachers are deemed among the highest-performers on campus and represent our campus in a positive light.
Spurs/ Rampage Teacher of the Game
The purpose is to honor exemplary public school teachers, counselors, or administrators who are enthusiastic, inspire their students to succeed, are energetic and fair and committed to their students and profession. 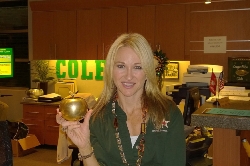 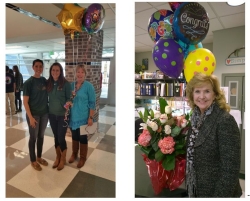